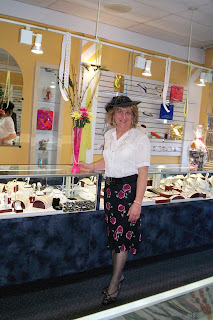 a friend of mine held a party at her store. i had been looking for a place to wear this hat since i had bought it about a year or two ago. it's in a somewhat 1940's style with a wide brim with black spangles with a black bow on the brim in the back of the hat. it also has a elastic one puts to the back of the head to help center the hat.

ironically this is almost the same skirt and blouse i wore to the last party she had at her store several years ago  ( accept for the addition of the hat).
the setting this time though with the flower vase was soooo pretty i couldn't resist a photo in front of it.
the hats were verrrry stylish. another gg came in a red hat verrry similar to my black one.

we had such a good time in a girls day out setting and after the party ended she locked the door and a few of us sat around for "girl talk"! then we sent out for pizza and chatted some more. it was sooo good to be accepted as one of the girls!