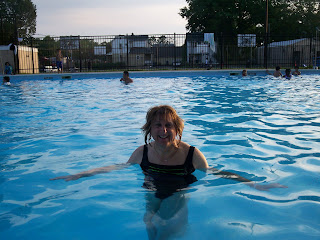 here i am for one last time this season back at the seidler ave pool in the nest town of plainfield nj.
i thought i might get here again the next day or labor day but both days we had rain. 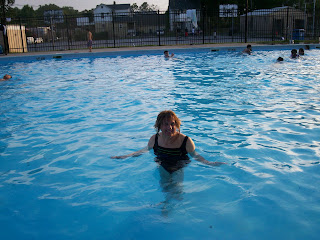 i had the good fortune to meet a new friend and her husband who was kind enough to use my camera and take my picture. this year the town couldn't get enough guards so they had to close this pool on tue. and thur. every week! the town has 3 pools  but this is the closest one to me. 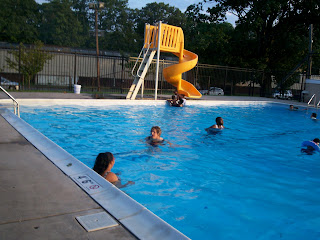 this pool has the cutest twirly sliding board and it was fun to watch the kids twirl their way down the board into the pool.
it has only been in the last couple of weeks that the temp and humidity had cooled down enough to be outside during the afternoon. ironicly the pool water was still warmer than the stand shower at the edge of the pool.

since it had been my birthday the previous week i had decided to allow myself 2 one day beach trips (as a gift to myself and went as my  other self) one a day when my aunt stops by so that she would be here to keep an eye on my dad.
at the end of the day on  thur the 23 i walked to the north end of Ocean  Grove ( the border of asbury Park). the next photo photo show as it looks today. 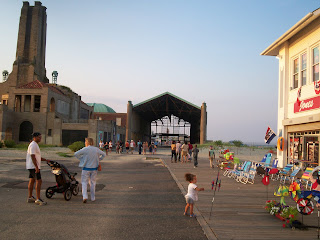 as a child i remember this as being a verrrry busy area. the building straight ahead had had a roller derby to the right of it which was torn down a couple of  years ago. the current building in the middle had a verrrry ornate fascia on each end in copper. as each year passed more was removed until it is now sort of like a airplane hanger look . to the left is the old power station now abandoned and boarded up. and farther left just out of the picture is one of the 3 carousel houses remaining. ll that is left is the copper sweral patterns of the windows and the beautiful lit crown of its roof design. the carousel was sold awhile back and now a small theater group uses the building. the empty boardwalk in the foreground previously had a portrait artist which every local has sat for a charcoal rendition of themselves. also a bridge went over head connection the former hotel that had been on the left (called the north end hotel) to the store's upstairs on the right.
there had also been swan paddle boats in the lake in front of the towered power station on the left.
all that remains of the hotel after it had a fire is the salt water pool which hasn't been used since the late 1970's. only a hint of  it's former glory.

i remember using the former carousel house nearest the pool which also housed a small movie theater (ohhh ahhhh it had air conditioning , LOL) a closed shooting gallery and a closed bowling ally  for our community concert band rehearsals in the late 1970's. my how things have changed with all this time  and yet even as new businesses have moved into this area yet the restaurant that overlooks the ocean has remained closed this season. it's hard to believe that this section continues to deteriorate  while the rest of ocean grove is vibrant..

anyway i cannot believe it is already labor day weekend! i hope everyone had a great day.

hugs to all
Diana