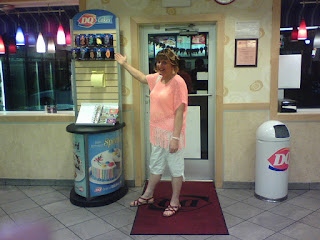 me at the Plainfield NJ Dairy Queen on So. Ave. Plfd. after attending the Scotch Plains NJ movie night on the village green this evening (Friday night). I  had to go to the movie as it was "Cars" :-) i even got to wear my new coral colored shawl like cami cover up. what more could i have asked for even brought my dinner and ate under the stars during the movie!
still it was a new step for me because the mayor runs the movies and although his wife knows that i am a transgender cd and saw me 2 weeks before at a previous event i hadn't stayed long. but he doesn't know of diana . this time i arrived verry early as he was setting up and set my lawn chair right in the middle of the green he does know my male self  Dave verrry well since i am the historical society  president in town and on a town committee for a project he has us doing. the historic building is next to town hall and owned by the township in which we docent the tours and maintain the artifacts.

sorry about the infrequent posting as many times i post these days on facebook. but since i often go to places by my self i don't usually have anyone to take  a photo of me. and if i am out and about as diana then i don't usually have the energy to post  stuff to the computer * sigh* 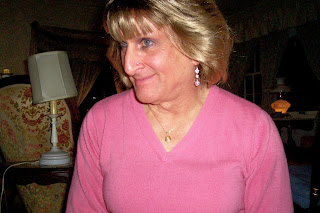 about 10 years ago on the first set of ear piercings at clairs store in the mall i  ended up with an ear lobe infection courtesy of their "cleaning" solution (my ear Dr had suggested the mall was cheaper than he very large medical group he works for... accept it cost me a second visit for some cipro drops to heal it...)
so i decided to do the second set my self so that i can have danglers in the first set and studs in the second set. i used the 14kt gold starter earings to "drill" the holes. i cleaned them real well in 70% Ethel alcohol and proceeded to "drill" them slowly through. then each day i cleaned them with Alcohol until healed. even though i knew enough about using the alcohol on the first set i figured clairs must know what they are talking about   since they do the piercings and supply the cleaning solution... later i found out that they rarely keep their young help more than 3 months LOL
that was about 2 years ago and usually wear the pink sapphire studs in the upper holes. this works better since the backs don't usually get caught on shop aprons like they did in the lower original holes.
the interesting thing is that the left ear i had to redo the second hole at week 4 when i realized it was a bit low LOL really anoying when looking in the merrior but somehow missed that on the original 2nd piercing!

so with that experience in mind and a bit concerned about the cleanliness of any local piercing shops i decided to once again use the 14kt gold starter earring for the nose piercing and after the alcohol cleaning proceeded to slowly "drill" it through. i'll admit i do have a somewhat high tolerance for pain as i don't usually use nova-cane for fillings jn my teeth but then again i have a rather skilled verrry gentile dentist.
after i drilled it through i realized i had a new delema since i hadn't bought a dose stud to insert and the earing has a pointy back so i couldn't sleep with it.  so a quick drive to Hot topic store in the mall in Bridgewater NJ 15 miles away before they closed and bought a pack of nose studs and the ocean salt spray to clean it with. upon returning home i cleaned the surgical steel nose stud and did the quick swap *whew* it went in.
one thing i figured out on the 2nd ear lobe piercing was that the use of a cotton ball as Clairs suggested was a no no. as the pieces of cotton "hair" get caught on the prongs and post of the stud and remain to collect bacteria. i now believe that is why the first piercing 10 years ago got infected.  ever since i can't have a earring back from a post stud touch the back of that ear lobe. i had the 14kt pink sapphire posts extended so the backs don't touch the ear lobe. ironicly the cheep fishhooks don't seem to bother it. go figure...

so back to the subsequent piercings the second set on the ears i changed out to the longer posts about the 2nd to 3rd day after piercing and removed to inspect  and clean in alcohol every day. (i know it goes against everything they tell you! but I didn't have a problem this time)

now we come to the nose piercing a bit trickier to clean and with just a ball on the other end it tried to "soda straw" itself out for the first week. lucky there were more in the pack since i lost it as i was up on a ladder cleaning the gutters. finally after about 4-6 weeks it decided to sort of "lock in"
unfortunately i decided to remove it to attend a cousin's (a nun) social event  for about 5 hours. egads it was a challenge getting it back in . i had to use the starter earring to sort of "gauge " the opening to reinsert the nose stud.

NOTE it is now  July 14th  it has now been about 11 weeks since the initial piercing. and it seems to have for the most part "settled in".  to me it looks better along with the earrings than by itself so even as my male self i have been wearing the studs and the nose piercing combined.

and on a second NOTE from Dave the male self: it seems as though the Diana soul has taken another step forward and  claimed another piece from the David  soul's male self 50/50 agreement. she keeps threatening to take over, but that was not the 50/50 agreement we had to SHARE the one human body. *sigh*
but as far as Diana is concerned she feels  it completes one more phase in her take over by insisting on  having these 5 piercings! she keeps forgetting that if she does a complete take over she will "kill off" the male souls' self. the problem is that the Dave soul likes both selves and can live with that but the Diana soul is getting greedy wanting more and more time and body as time goes on.
Posted by Diana Nicole B at 11:00 PM No comments: