i hope everyone had  a Merry Christmas! 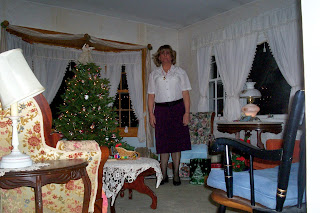 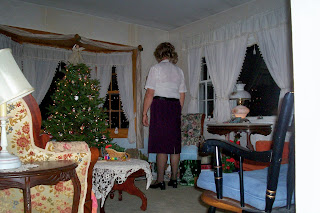 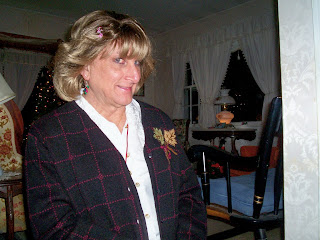 believe it or not it was 65 degrees here in nj hence the summer dressy short sleeve blouse.
the 3rd photo shows my dangly Christmas earrings and sparkly hair pin


Santa was good to me Diana this year he brought me a new coat for my casual look. 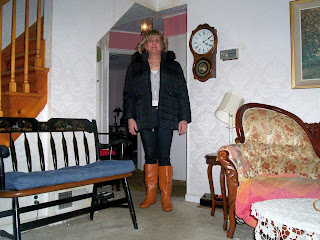 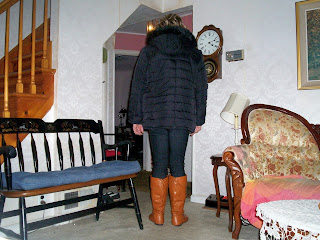 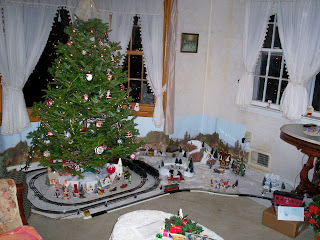 the weather was sooooo beautiful herein nj with the humidity below 40% and cloudless blue skys almost like so. calf. weather. and since i already taken down and put away my pool for the season i decided to get some more use out of my newer bathing suit by sunbathing on the patio. 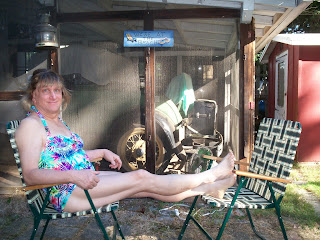 that and run some garden RR trains.


a beautiful day in nj to run trains.  the locals and the tourists were pulled by the Forney type engine past bird point! it looks as though they have brought some liquid refreshment in the keg car.

hope everyone else had such a lovely day!

hugs
Diana
Posted by Diana Nicole B at 2:08 AM No comments:

an interesting eveing at the local church fair sunday septumber 6, 2015 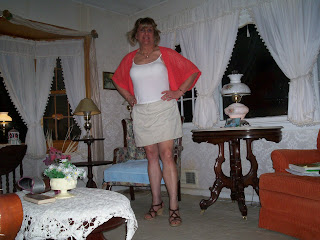 i am soooo excited i must share this with others. i went to the local Italian labor day fest at my church. and as i was sitting eating a family sat down next to me at one of the large community tables as it is like a carnival with rides and such. when i turned to glance to my right i started chatting with this family. who said i looked familiar. when i mentioned i had 2 selves their eyes lightened up and the child's mom's (yes that is correct plural) introduced me to their teen child who currently is male. suddenly the conversation changed to the transgender topic and it turns out their son is planning on transitioning. we had a great conversation till it was time to leave where we exchanged phone numbers for future info. this was sooooo cooool. smile emoticon it was the last thing i would have thought possible this evening as i had attempted to blend is as usual the photo shows what i had worn for the evening. a tiny bit dressy since it was a sunday evening.

a sort of continuation from yesterday monday june 14, it becomes 2 full days as diana2015

this is sort of the remainder of yesterdays story.

first yesterday turned out to be pretty good in that  first after eplaining the delay in the meeting due to being transgendered and  not wanting to confuse the meeting she proceeds to tell me  she has a transgindered cousen as well as a goood friend fellow teacher who is also transgendered cd in nj so it would have been no big deal had i stayedin diana mode *sigh*
next i returned home about 8pm and changed back into diana  mode adding the makeup this time and quickly headed out the door LOL before there wdre any other interuptions. first i went to dollar tree store for a few things i forgot yesterday.  next to target store checked out the bathing suits ( one piece malliots ) and drooled over the bikini's *sigh*  then onto walmart in the same mall  for a few basic staples and got sidetracked to you guessed it the bathing suits. tried on a malliot but the back just wasn't makein' it for me. finally home for a verrry late dinner cooked on the grill between the thunderstorms.

today i got up and felt the complusion that it was once again going to be a diana day.  yep there's no getting around it as it just slows my day down when i end up in indicison between male mode and diana mode. it is easier when i can to just go with the flow. sort of like being caught in a rip tide you just have to swim parrille with it untill you get past it
since it has been warm and muggy for a few  days here i was able to wear my white jeans skirt and a tank top with lace trim and brown sandels. (if it is not cute ,and pretty  i don't wear it!)
so out i went finaly this afternoon late to pick up spomething from wendy's  as mondays and thurs i usually don't cook. chatted with the grill lady who admired my mauve toe nail polish and out fit.  then down the street to the a & p food store for some mike which   grew to a few other things and finaly back home to eat dinnner now at 8:30 gratefull to have had 2 days in a row as diana (considdering i sleep in grirlly chemises it becomes 2 full days as diana. woooo whooo!
higs diana
Posted by Diana Nicole B at 7:29 PM No comments:

ever have a day when you are all dressed to go out and the phone rings.....

hi this is ......  today is the only day i have to cordinate to drop off the antique keyboard so that the keyboard restorerer that we both sending  antique keyboards to can pick them up next week. i can be there in an hour.....
Grrrrrr.....

lucky i don't have my makeup on yet but everything else was done hair, jewelery, outfit, lucky just clear on the nails.

now although most of my friends and neighbors and members of the historical society all know that i am transgendered but not changing and many have seen me dressed it still becomes a problem for those who don't know me. *sigh*

the worst part about it is that the rest of the week is my crunch time at work and even though i am the owner i don't wear nice pretty clothes on the job because since i repair band instruments it seems that it never fails that when i am asked to check for dents in trombone hand slides ( the most delicate part of the trombone) the student allways seems to leave spit/moisture ect in the instrument. then when i hold it up to the light to look for the dents yep you guessed it the moisture rolls out on my shoes. over the years i have learned to jump back when this happens since i have been sidetracked with the conversation with the teacher.
or there is the trumpet scene with the excess valve oil applied to a sticking valve with a dent in the valve casing  that now gets on my hands or worse drips on my clothes. hence i wear the "uniform" dark slax and a white golf shirt.
when i say crunch time it is like being in a toy shop at christmas.
the purches orders at the bd of ed close out on july 1st or the money is lost. but the teachers don't get the instruments returned from the student till the 2nd to 3rd week of june. *sigh* no one wants to understand that it is physically imposable to have it both ways . if i work off just a guesstimate i loose and eat labor due to unforeseen problems with each instrument. there is no way one can pick up instruments at the school , do the work and type the invoices all in a week. the bus adminastrator wouldn't work under those conditions in fact sometimes they hold off on approvals for 3 - 6 months.

so today was supposed to be a diana day people have told me "now that your dad has passed you,'ll have more time to be diana." yea really ? ha it seems it has given me less time in fact while my dad was alive i got to dress more often even having sunday or other days dinner with him as diana. he seem to look forward to my diana days. *sigh*

and you know how hard it is to change back again after an hour of waiting for someone to show up. *sigh* as the best part of the day is ruined waiting around in male atire. *sigh*

well i have said my peace.

hugs
Diana
Posted by Diana Nicole B at 2:50 PM 1 comment:

with the good weather having finally arrived, (i think mother nature kept hitting the snooze alarm LOL)  i am once again starting to do some social things.

my friend  Suzanne C. came down today from Boston on business. it is hard to believe it has been several years since she was here last!

we decided that since time was of the essence we'd meet once again  were we did the last time at houlihans restaurant in bridgewater NJ for coffee and desert. 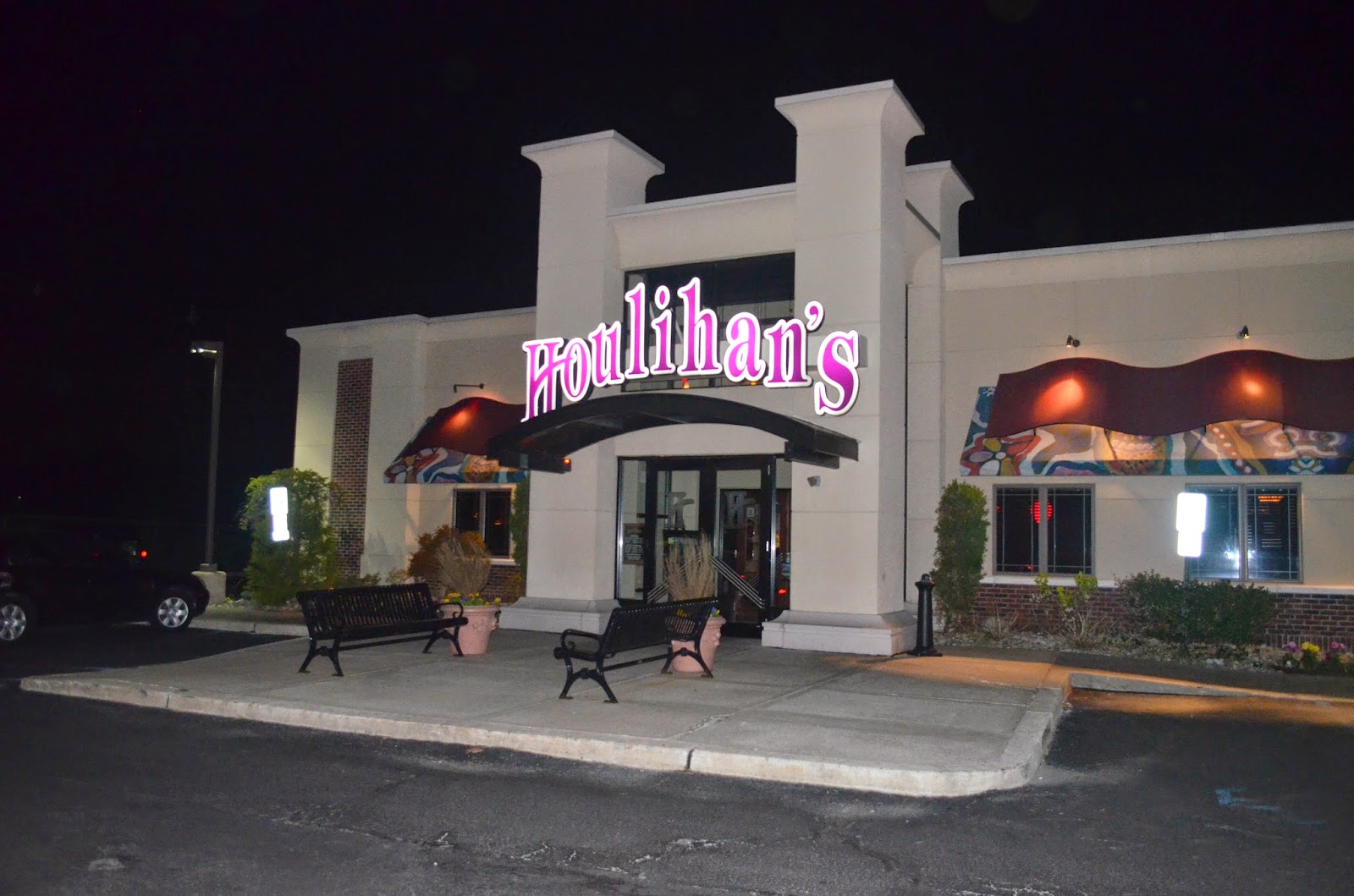 since it was later in the evening the restaurant section had thinned out but the hostess was kind enough to let us sit at a table in the now empty dinning room.
3-1/2 hours went by like minutes and our conversation was as if we had meet last week instead of several years ago when she was last here on business. 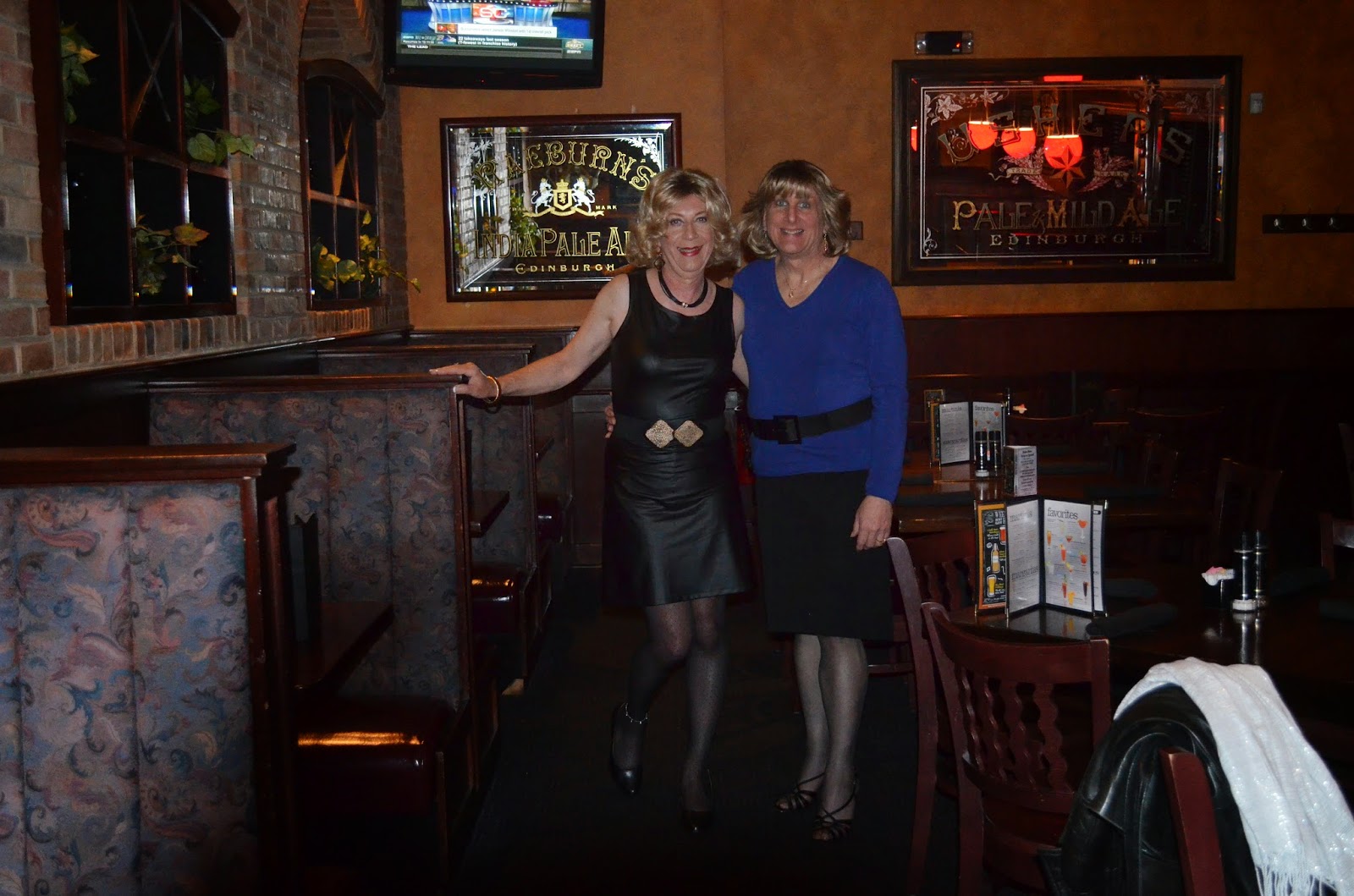 Suzanne had this "killer -stop traffic "dress on and looked picture perfect as always!
we have many other interests in common so we are never short on conversation. ie we both have a red hobby convertible sports car that gets put away and covered up for the winter. 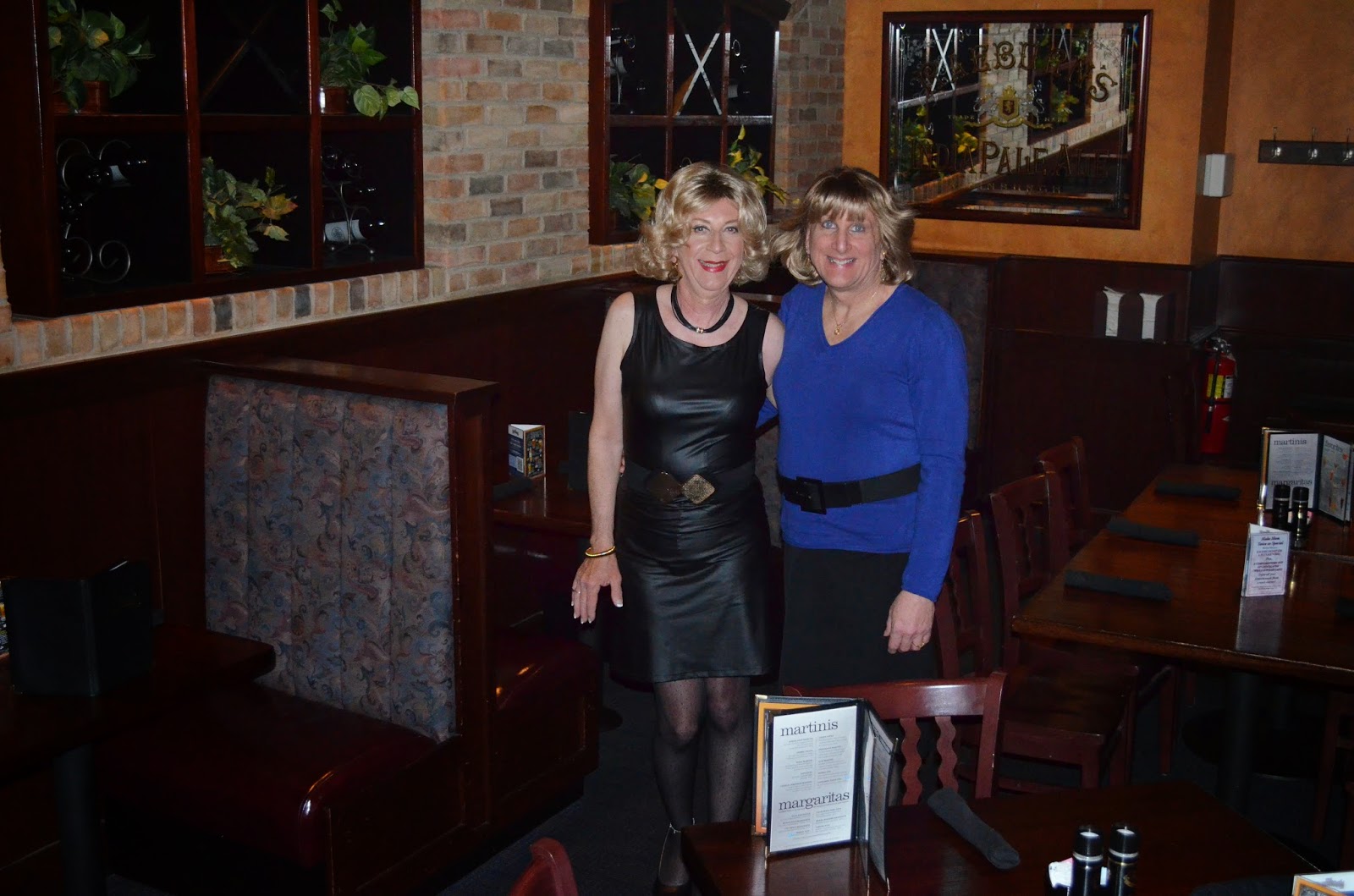 the best part was the waitress was attentive but left us alone to chatter away. :-)
sadly the hours had flown as if they were minutes and it was time to leave before our carriages turned into pumpkins.
we said our goodbys and headed on our way the richer for each other company!

Diana
Posted by Diana Nicole B at 2:46 AM No comments: