Sadly my dad passed on as of last tue.
we had an honor guard from the army at the interment today with me as bugler (on trumpet). i used the newly acquired bach which dad had gotten chance to try last spring  the day i bought it.

you see my dad gave me my 1st trumpet lesson when i was age 9. being a second generation trumpet player it was an honor to play taps for my dad.
in fact, in my view, i felt that had if i had not played it would have been dishonorable.
my dad had done this detail many times and said that echo taps was much harder emotionally to play for. (we didn't do echo) the indoor mausoleum at st gerts in Colonia has quite an echo so i was placed at the entrance foyer entering the mausoleum chapel. i am proud to say that with Gods help i was able to play honorably.
Posted by Diana Nicole B at 11:44 PM 6 comments: 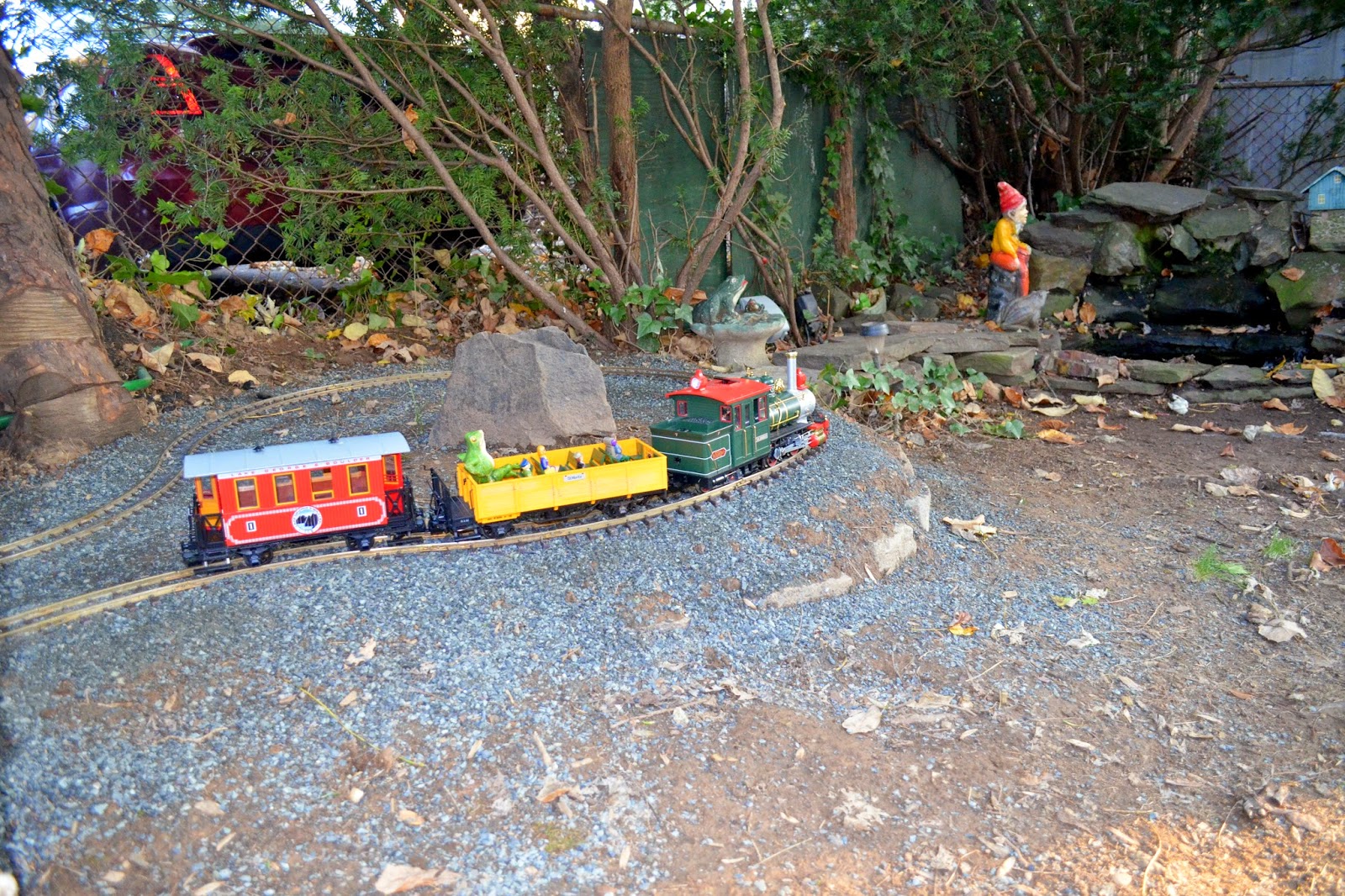 in sept due to the fact that i had to stay close to my dad after he broke his shoulder this past summer while grazing for cookies in the kitchen... i decided to actually start building a G scale garden rail road.
i had bought a starter set from a friends garage sale. it had a small engine, several extra cars, a power pack and a lot of track which was designed to be used ether indoor or out door.
so labor day i started ripping out the excess ivy near the waterfall pond dad built many years ago.
first i had to level the ground this took 10 wheelbarrow loads of dirt which my neighbor supplied when a tree fell several years ago leaving a pile of dirt he was getting rid of. next he used his pick up truck to get 3/4 of a ton of gravel dust for the ballast. this meant offloading another 12 wheelbarrows of gravel dust 100 feet out to the pond area. then there was the removing of two 8" tree roots and of course there ose one at each end of where i wanted to place the track LOL. lucky we had a warm fall because one night after dinner using my neighbors contractors light i kept working till the sun came up LOL! after much hard work the rail road was up and running. 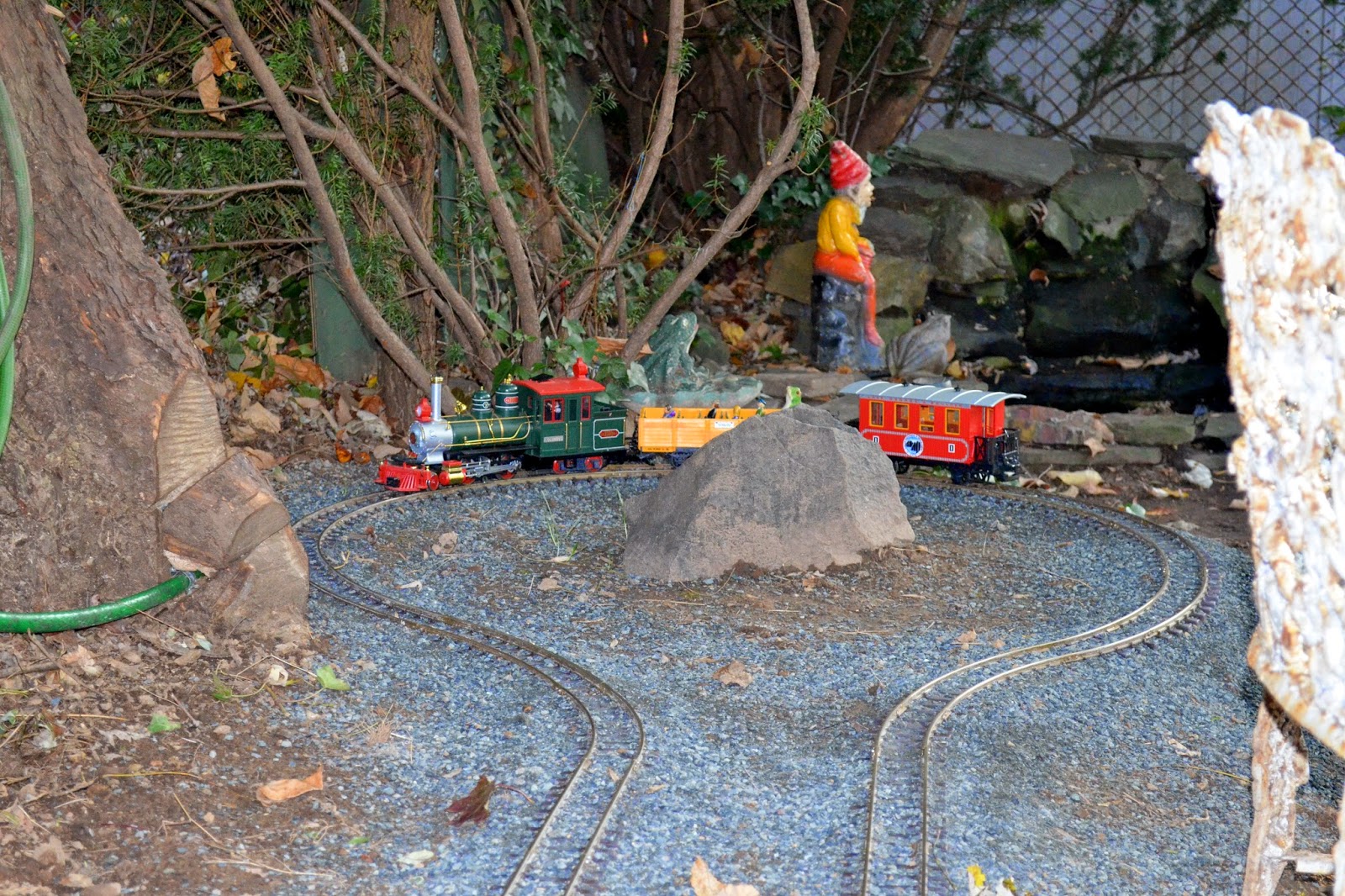 i called it the "Frog Hallow and Bird Point Rail Road" because it starts near the pond where we have dwarf and frog statues and goes  30' up to the bird bath via a dog leg near the old fire pit. 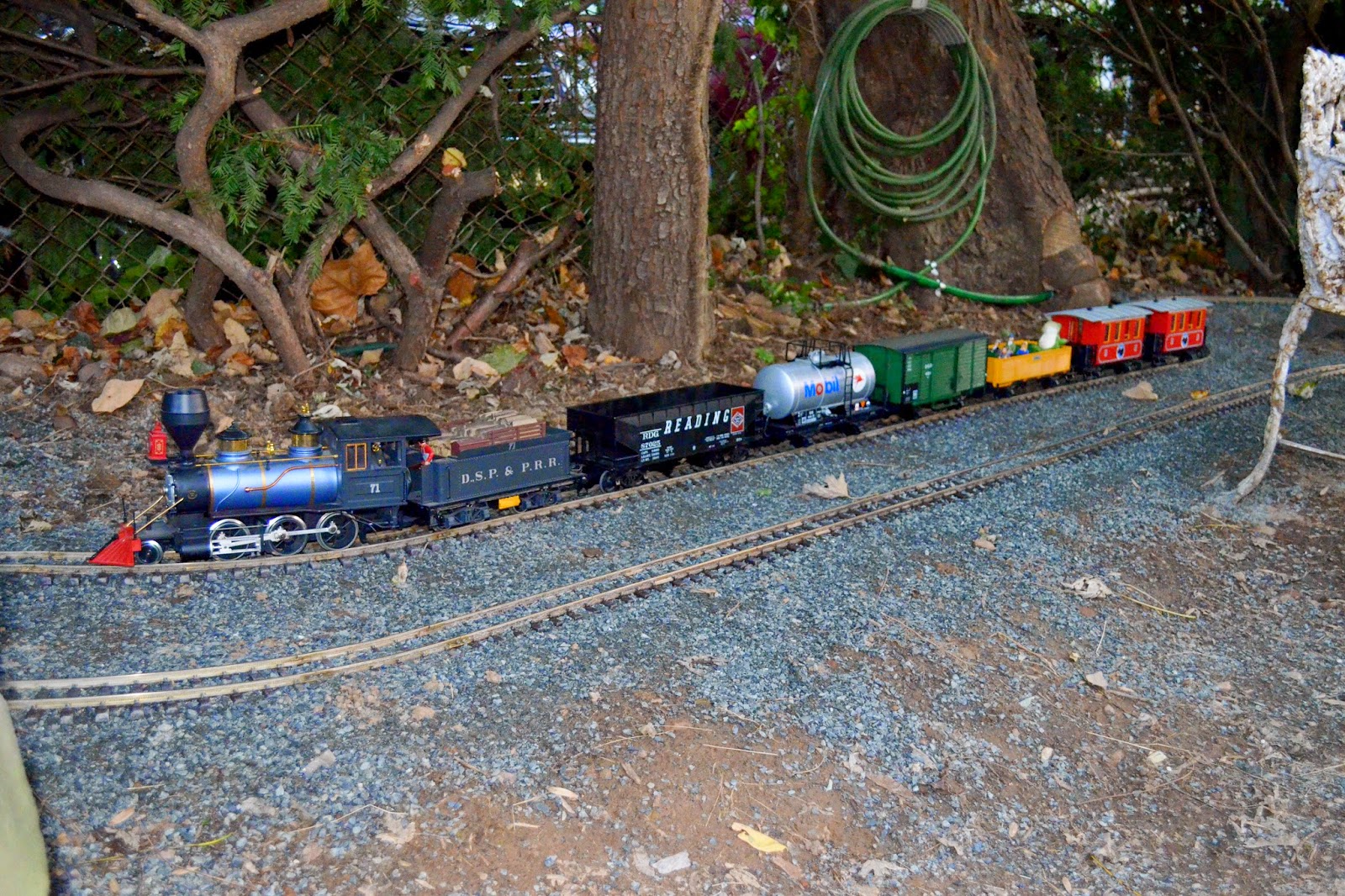 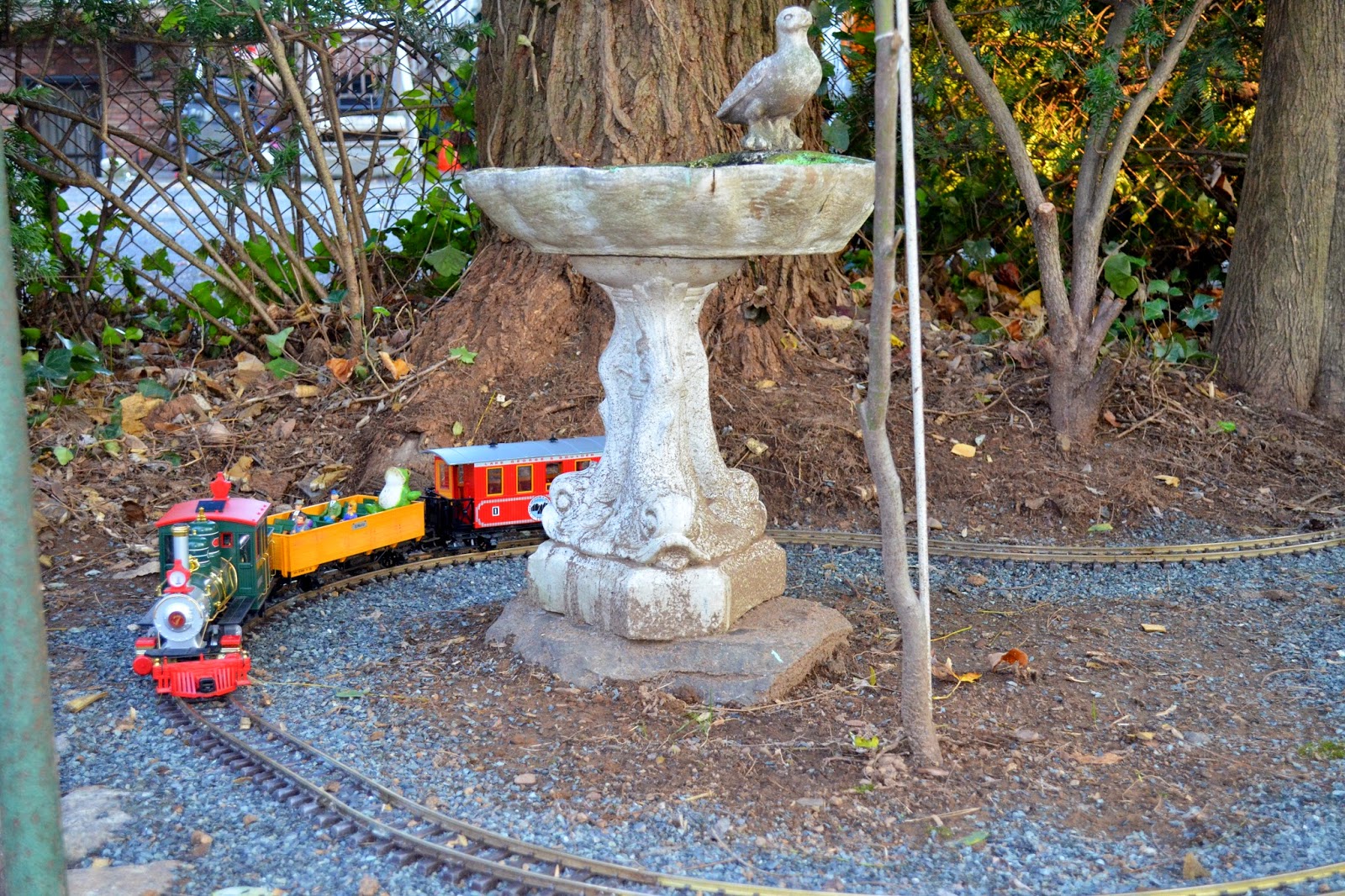 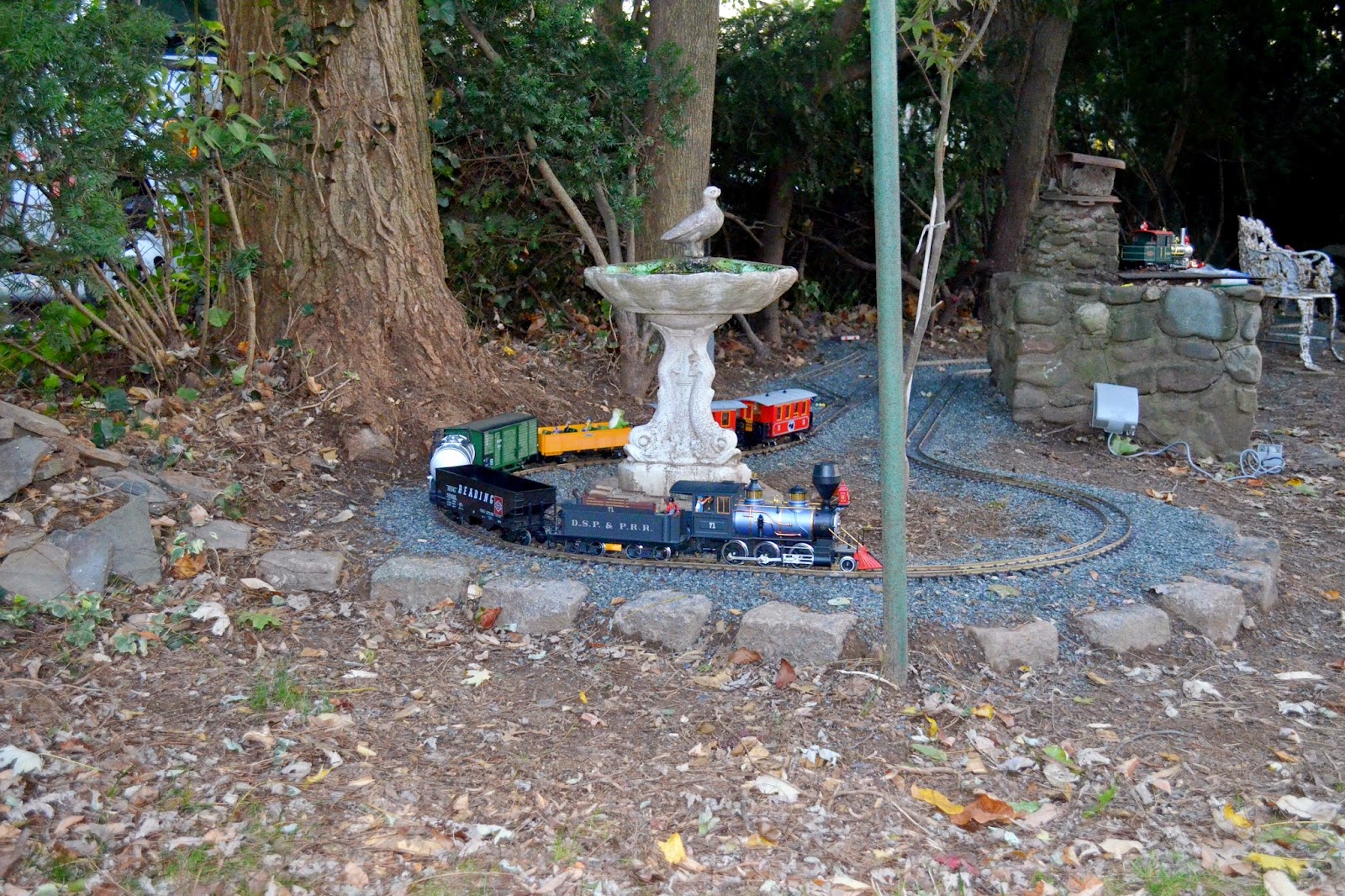 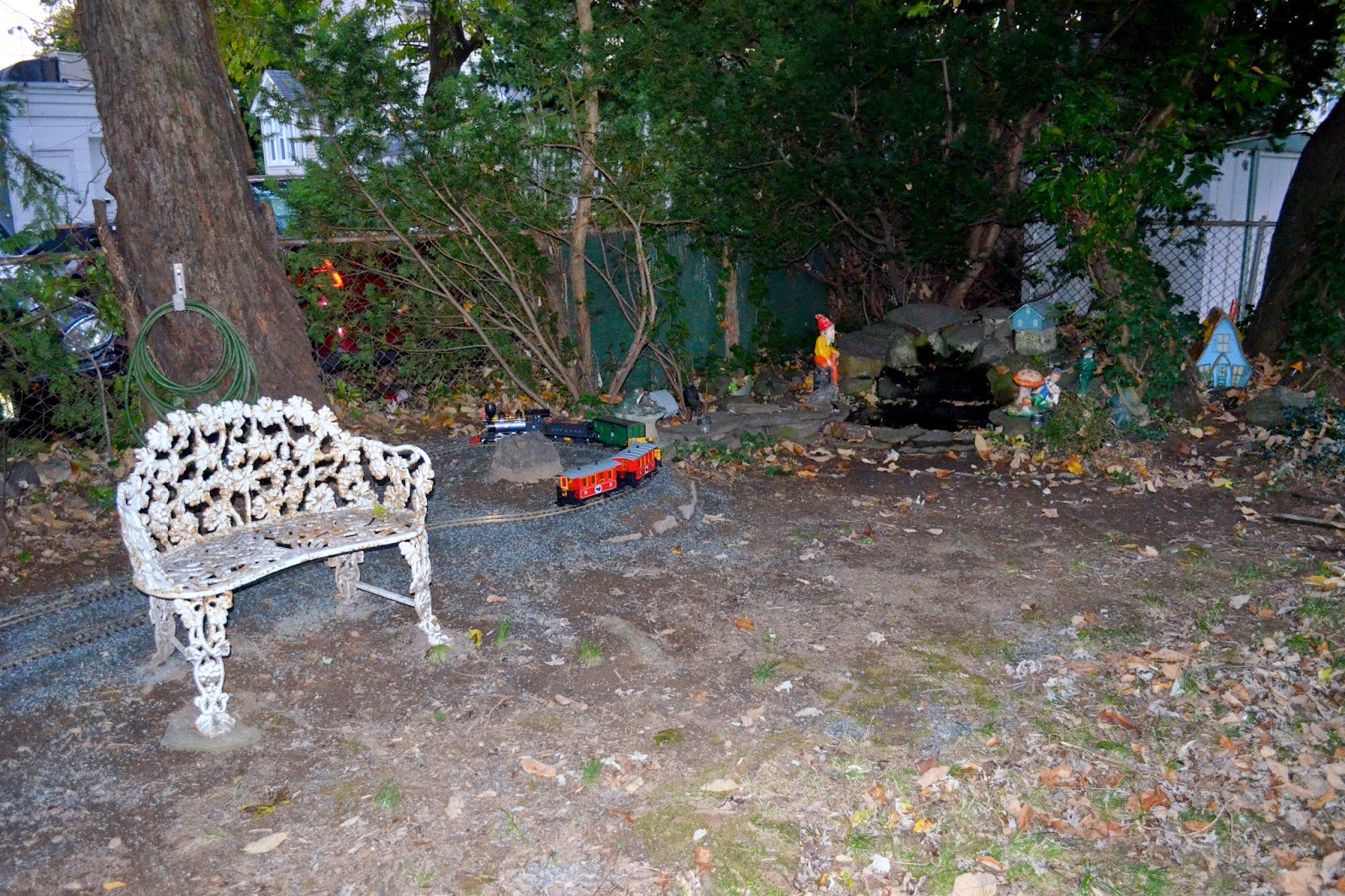 as one can see i have acquired 2 more engines a Forney with sound and a Mogul.

Dad did get to see the trains running in late Oct.

Diana
Posted by Diana Nicole B at 11:00 PM No comments:

not much to write about in diana land as there hasn't been to much time to be diana since my dad  (89) fell 2 weeks ago and broke his dextro humorius ( upper right arm near the shoulder). the poor guy is soooo right handed so that it has effected his confidence in his balance. so i have haried a college guy up the street  to help me guide my dad from the bed to the chair.

as if that isn't enough the top of the gas stove just sort of crumbled yesterday.
so i had to call and order another stove.

in the middle of all this the neighbor's main water valve broke off in his hand creating a gueiser. requiring a call the the water co to shut off the main valve . next the fire dept arrived to pump out the basement which now had calf deep water.

so anyone reading can see why i have had no diana time.
Posted by Diana Nicole B at 11:36 PM 3 comments:

catching up on my blogs due to to much time spent shoveling snow this past winter! May 14 2014

i can't believe i haven't done an entry since 3/4 or rather almost a year ago!
i think mainly due to theharsh winter we had. i spent way to much time shoveling snow and was just to exhausted to do any entries!
i had taken some photos with the good intention of posting them but they just sort of piled up on my desk until i finally filed them. now i will have to dig them back out
so i thought i'd better at least jot down a note or two! 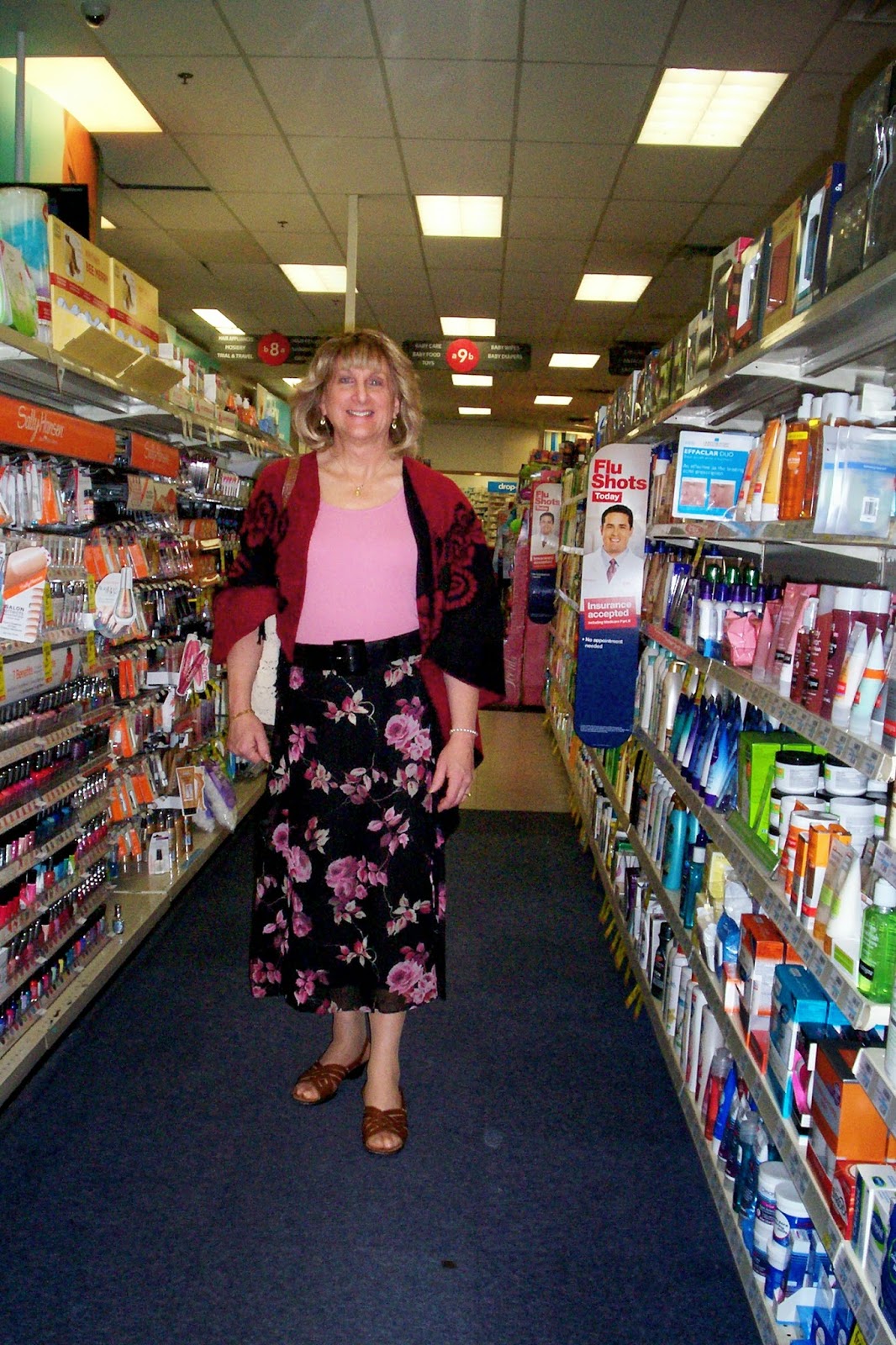 this was in the late fall at the local cvs pharmacy store. i really like this shawl but rarely get to wear it at the temp outside must be not to hot or to cold to wear it. 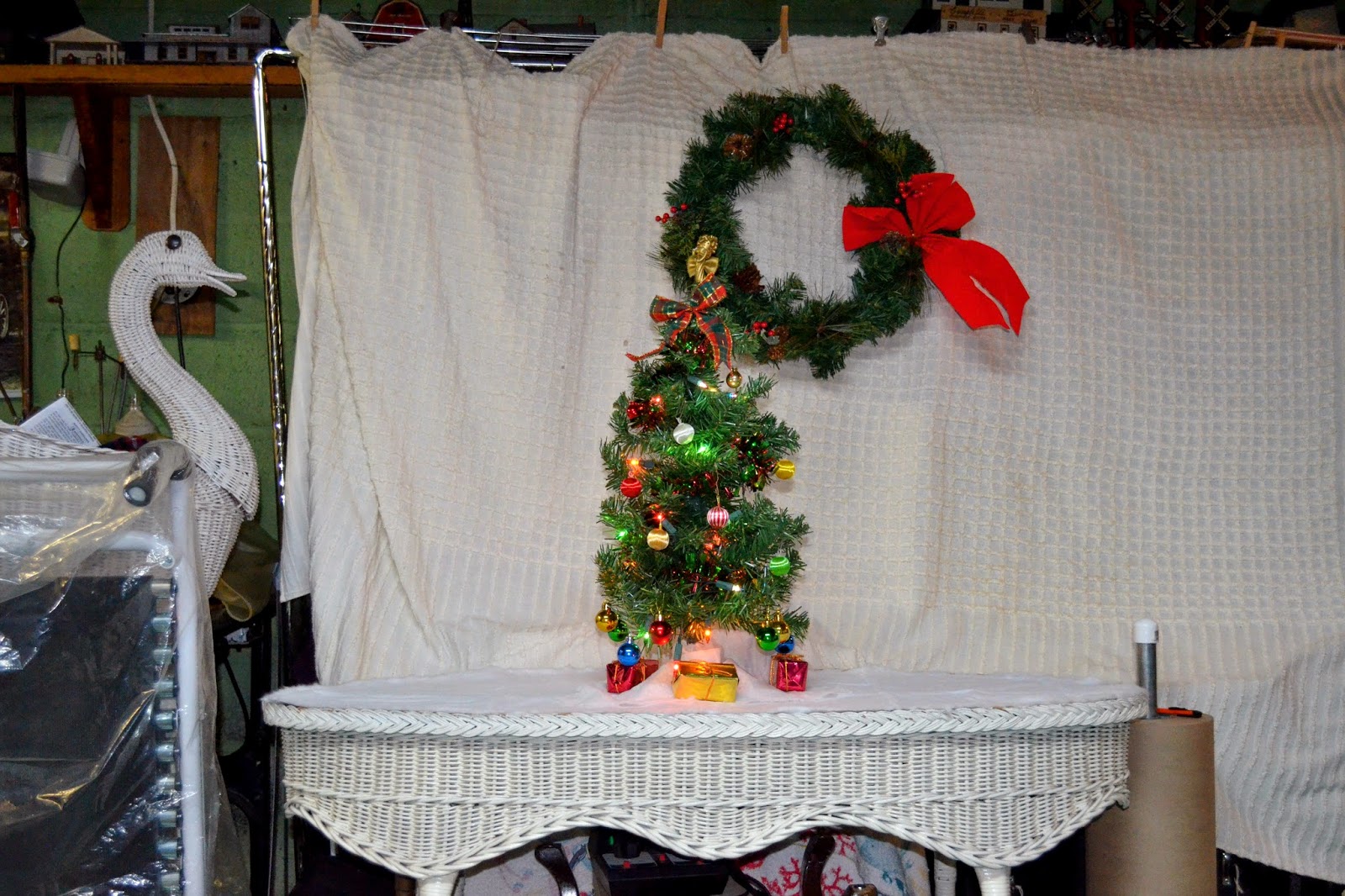 welcome to my workshop and studio area. i was sooooo pleased because i had decided to clean up the clutter on the table and put the shop tree there this year! 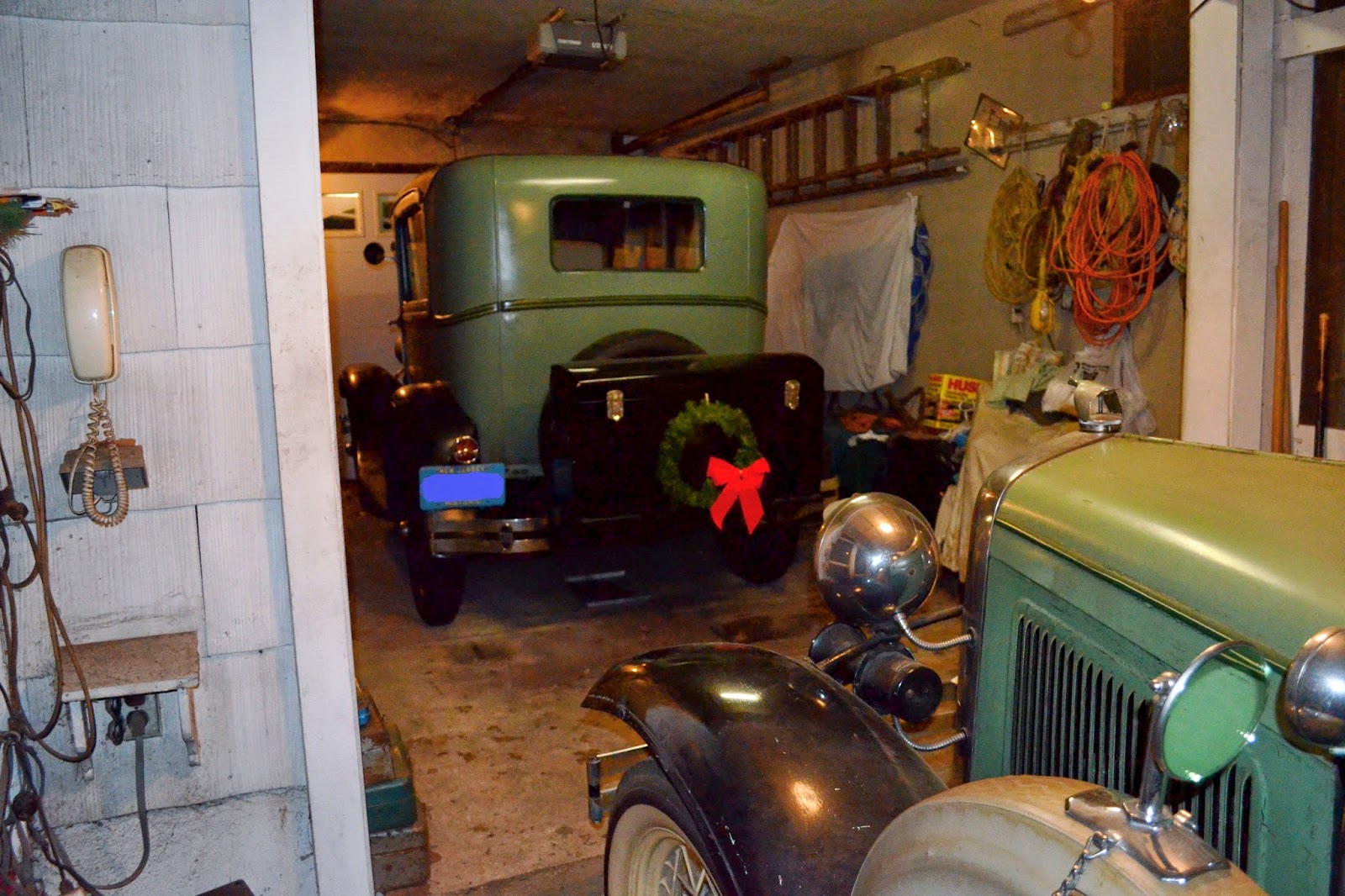 here are the decorations on my 1929 ford 2dr dad's 1930 ford roadster is in the foreground. it is funny how while i was changing 2 inner tubes how the job escalated into 2 months instead of 2 days! it started with a broken spoke i found after i changed the first tube. these are factory welded spokes so off to my neighbors shop and his mig welder. the job tube by tube and wheel by wheel just dragged. hence it was time to decorate the car before returning it to the storage garage! 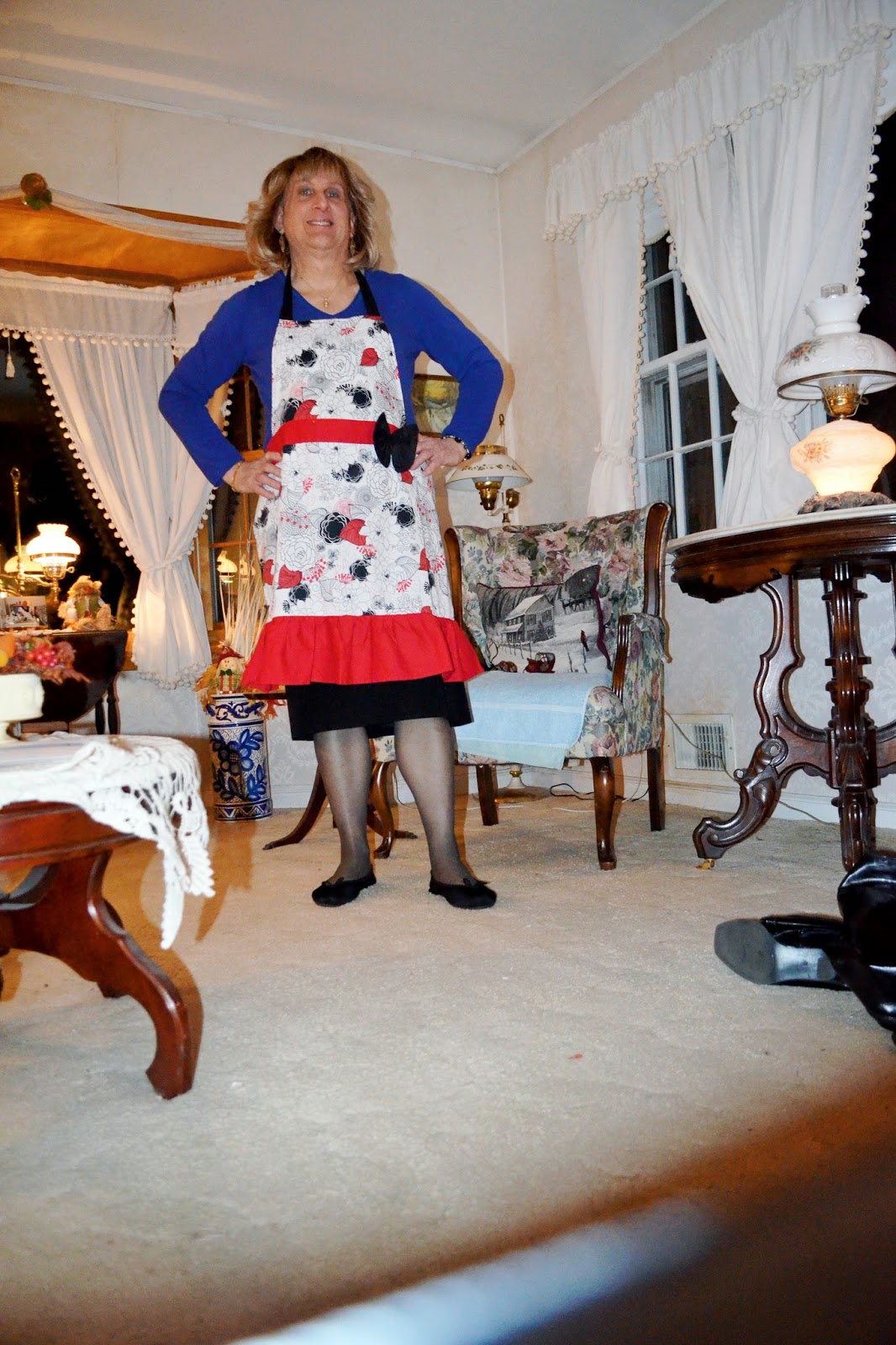 the new holiday apron! i just loved the cute lil' bow bow on the front! 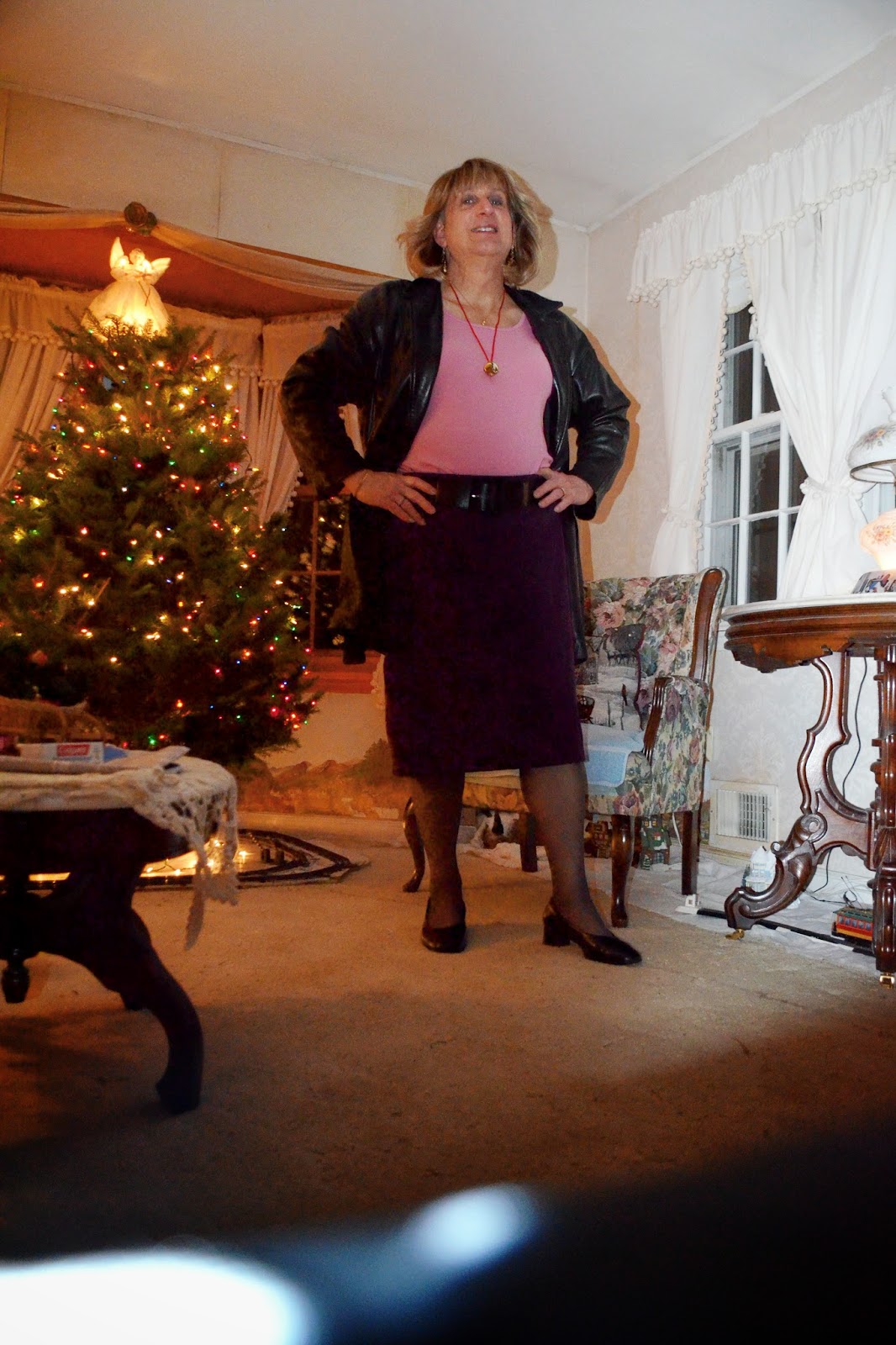 me in front of our christmas tree.
(note the outfit is pre snow and super cold weather) 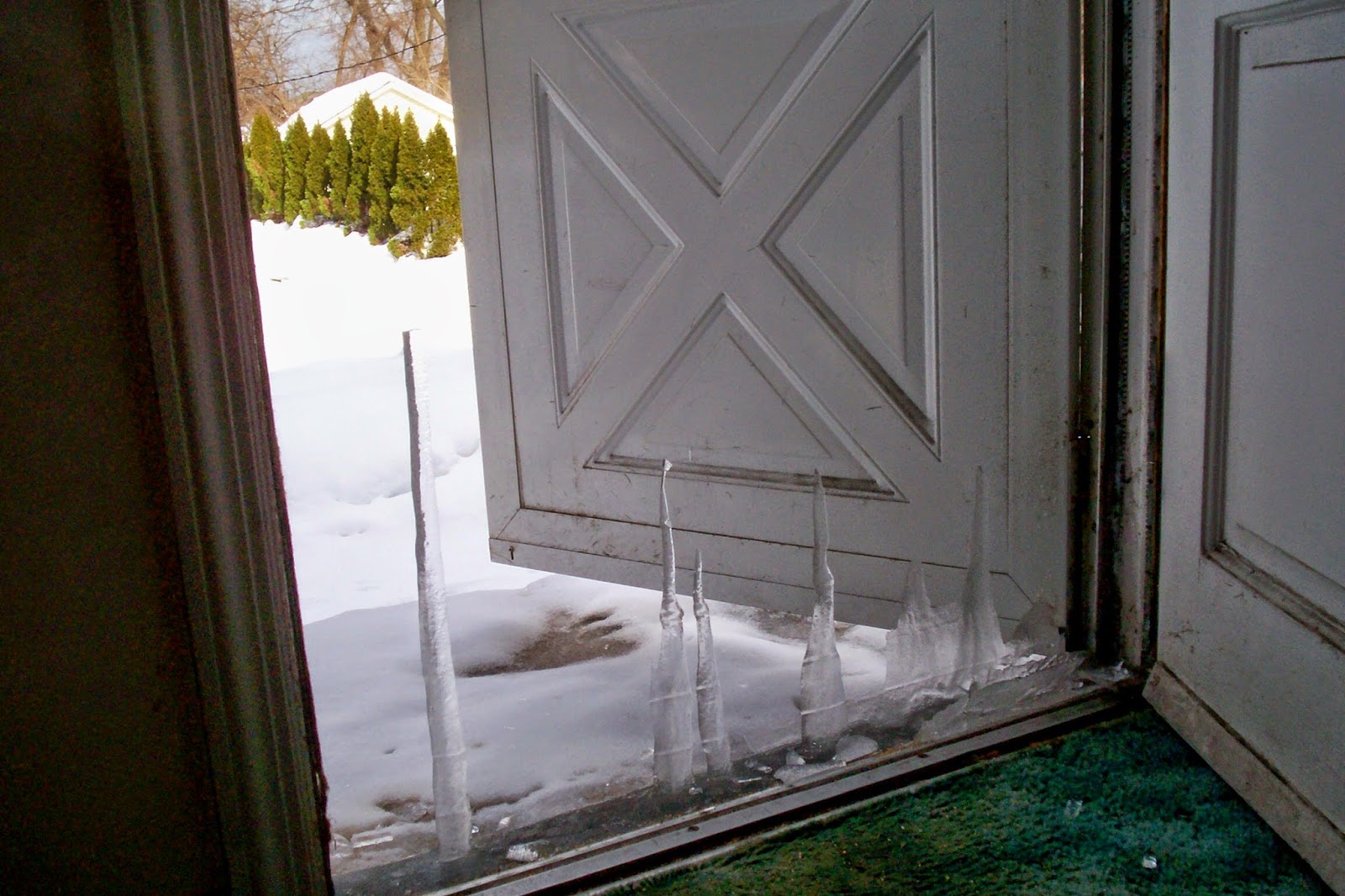 it was sooooo cold this past winter...
that we had icicles forming from the bottom of the door growing upward! 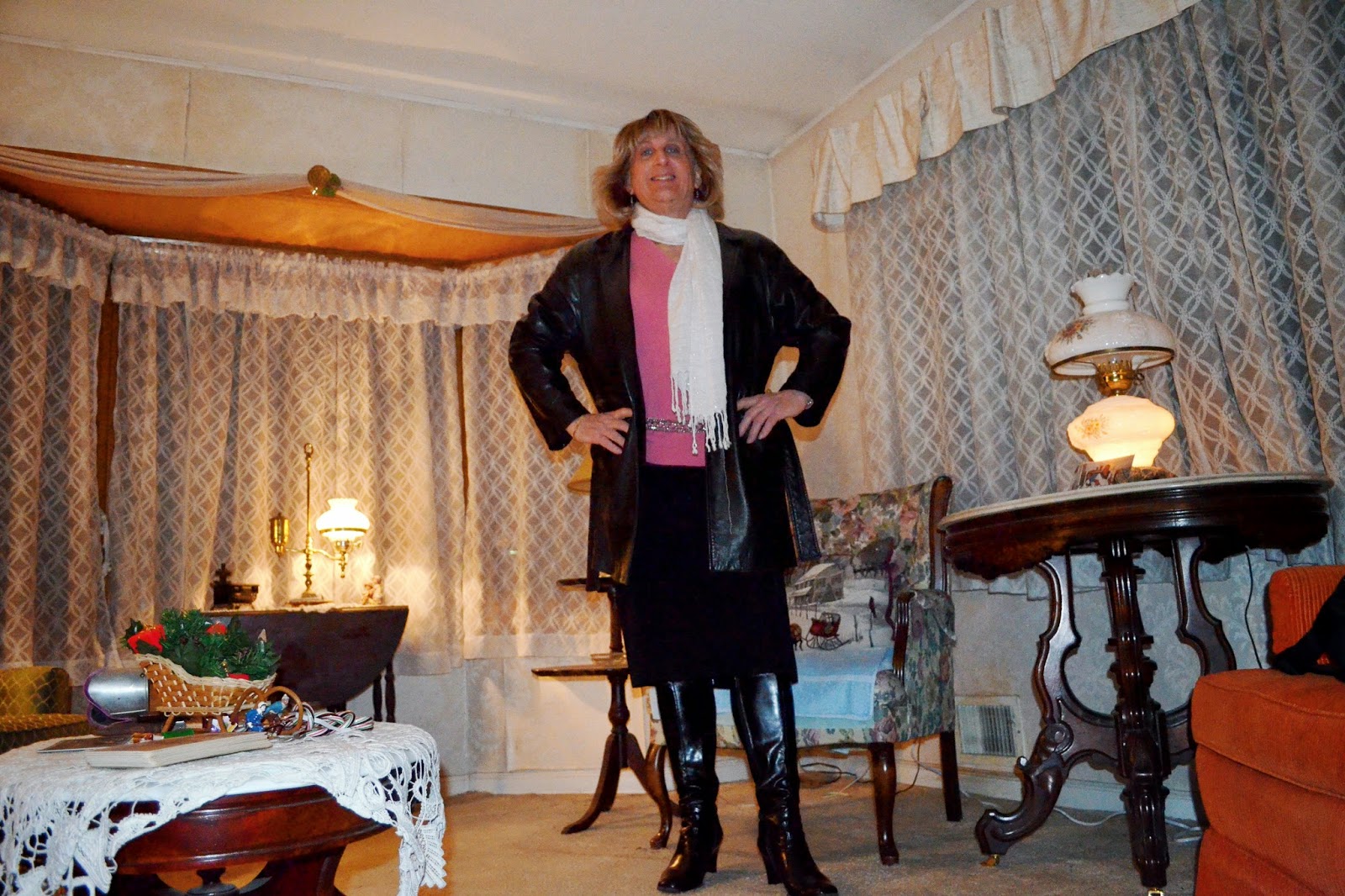 this is after christmas when it got soooo cold  so out came the boots and warmer outfits. this must have been on one of the slightly warmer days as i don't have a really heavy long coat on. 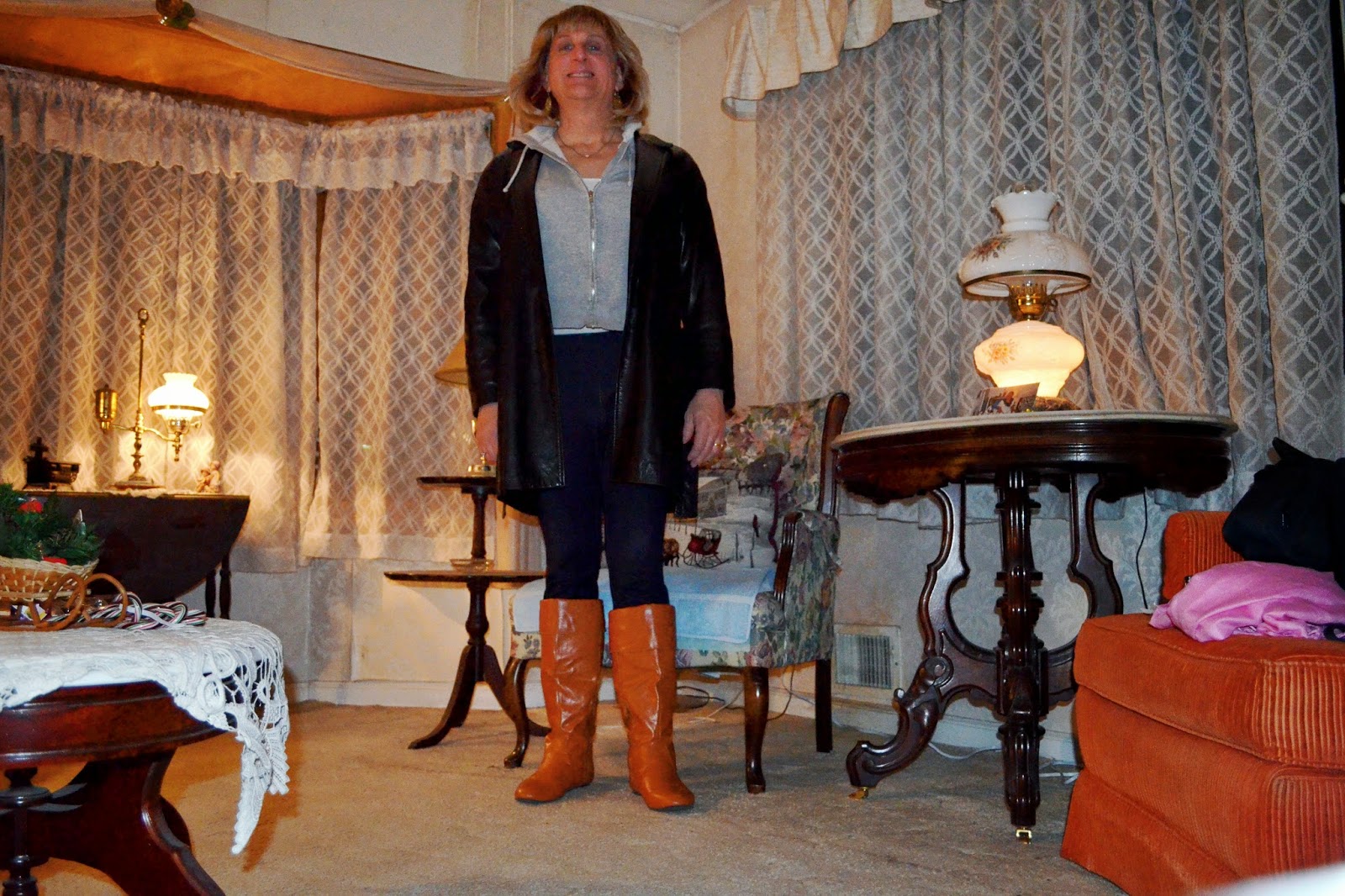 and finally toward the end of the winter when no one including the gg's cared about fashion all they cared about was staying warm!

one of my christmas gifts which i picked out and i   paid half and dad the other half was a early christmas gift  a dslr camera.
now i have been drooling for 5 years waiting for a clearance sale. which target stores finally discounted for about half price. i had to call 5 stores to find one still in stock. the self timer on this camera is verrrry easy to use so i just set it on the decons bench accross from where i am standing and in 10 seconds it takes the photo.
i have soooo missed using my slrs since the demise of film but swore i would no longer buy cannon products due to the lack of support of replacement parts.  the ae1 was a great camera but they sold it to the public and tossed us out of the nest like baby birds. and when they came out with their dslr they chose to use the poorer body the reble instead of the better body the ae1 . therefore the lenses were no longer useable on the newer dslr


yet pentax and nikon  still used their same mounts and older lenses could be used.
like from the pentax k 1000 but there are less places selling the pentax which brought me back to the nikon 5000 series.
i really love the ease of use of this camera. the auto settings which i thought i'd never use iare very good hence i almost never revert back to the manual settings.

my other great gift which i picked out and contributed to was a small acetylene and oxygen tank set from harbor freight stores  i combined this with the jeweler's torch set from smiths called the "little torch" so that i could do more efficient silver - solder ( high temp soldering sort of brazing) of brass musical instrument keys.
although the tips are verrry small the number 3 tip still puts out welding temps of 6000 degrees for a btu use of over 1200 which is more than enough for the silver alloy rod . the coolest part is it ie designed to use any yes any bottled gas source along with bottled welding oxygen. many jewelers use city or propaine yet the refrigeration repair techs use acetylene like i am using. it is different than welding on steel as one needs to keep the flame back a bit instead of in close as in welding. but with all the import instruments coming in the country i can no longer obtain some of the key parts for saxes so now i can do a high strength repair of a broken key assembley and not tur the job away.

so that is all the news for now and it is time to go to sleep.