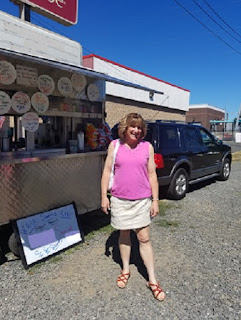 me at the local hot dog stand last thur sept 15th called "Popiks Place" on Terrill rd. in  Scotch Plains NJ
Steve Popik sells only the best quality Sebrits he can get. so most thursdays when my aunt has come for lunch i usually go at her request around the corner to Steve's stand to pick up lunch.
Steve has had this stand for over 16 years. and he has managed to support his family of 5 this business

the interesting thing though this particular thur is that the guy ahead of me who was a new customer to the stand kept trying to "check me out" out of the corner of his eye.
now this was not the kind of look that said "i know your a cd and it's obvious" but rather the "checkin' me out" kind of look when guys are trying not to be to obvious. *giggle* needless to say since it was a bright sunny day and we were out in the harsh sun so i was kind of flattered.

although my aunt has seen me dressed as diana usually on our lunch day  i usually dress as my male self but this particular day for some reason i was compelled to dress as diana. maybe it was because i had gone back to the ocean Grove beach the day before as diana. so i was on one of those multi day rolls in which i get to dress for 3-4 days straight. i have learned not to fight it but rather to go along with it if i can that day. it is sort of like getting caught in a "run" in the ocean it becomes easier to swim with the run that across or against it.