i decided that while the weather was still nice and after the heat wave somewhat cooled down it was time to head to the Ocean Grove beach. 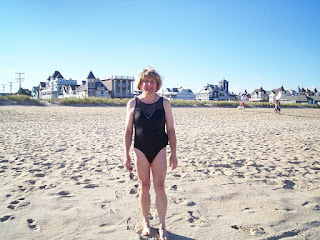 although the prediction was for and afternoon storm it turned out to be very nice with winds from the south until about 5:30 whe all a sudden the wind shifted out of the north blowing sand at me. (due to this i have had to use a previous year photo but it is the same bathing suit and beach scene) so i decided i had had enough and when and changed out of my one piece maillot bathing suit because i was getting chilled. and although i had a wind barrier with my i felt it was to late in the day to put it up. besides i had finished most of the goodies in the lunch bag by now. so off i went first driving to the north end of town and then walking on up to the north end of Asbury park hoping to find an open restaurant now that it was out of season and the middle of the week. 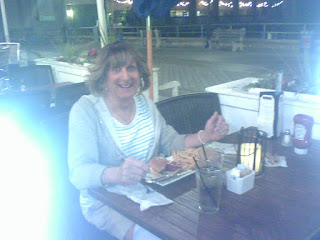 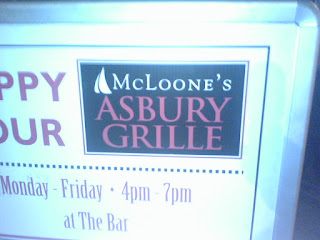 i ended up at Mcloon's which is in the former Howard Johnson's restaurant building.
i decided that the burgers there were better than a local irish pub / sports bar called Clancy's over at the gates of Ocean Grove. but that Clancy's has a broader plain food like soups and sandwiches than McLoon's.
while there i noticed a couple 2 tables away (we were out on the boardwalk dining area) .
she had on a gorgeous white dress with a verrry low cut back. but it had the most beautiful daisys stitched to the cross straps on the back. upon mentioning it to the waitress she too had the same thought's about how pretty it was.  the girl later as she was leaving thanked me for my complement and said she had only taken her jacket off to somewhat tease the guy who was doing a small clown act on the boardwalk near the resturant. :-) lucky us or we would have never seen how lovely the dress was. :-)
the evening turned out somewhat cool but lovely with only literally 2-3 drops of rain and nothing more.

all to soon the evening ended as i needed to get on the road to make the 50 mile drive back up north.
i so miss having a house to stay in in Ocean Grove as my famialy rented the top floor of our friends lovely queen ann victorian house with it's tower room view of the ocean. *sigh* when my mom got sick she could no longer make the stairs and in more recent times our friend the owners mom passed and the daughter renovated so at this point in my life that is no longer an option *sigh* after spending about 30 summers there on long weekends it was my home away from home. but i was lucky and blessed to have the use of it for all that time. maybe some day if the economy ever improves it would be nice to have a verrry small cottage that i personally could maintain....

all in all it was a lovely day!